November is here and nearly done.

As soon as the temperature drops and the nights draw in, time flies by, as if time exists in proportion to sunlight. Still, in a couple of days my (gigging) year really will be over, as I play the final shows of 2016:

Both shows are alongside Xtra Mile's own Northcote and Jon Snodgrass, both of whom I'll be gigging with for the first time. Exciting.

Generally, the year has been good. I mean, the aim was to release the album and maybe do one or two shows, but instead I've managed to get into double-digits for shows and accidentally neglected the album.

The album is done, named and hopefully there'll be real, actual news on it soon. I could, and will, write at length about it once I can tell you more (otherwise I'll just be writing vague nothings) but for now let's just say this: I'm incredibly proud of how it turned out, and I'm working hard to find it the right home. See. Vague nothings.

I write this on Saturday, which as everyone knows was voted Day Most Likely To Be Awesome in its school yearbook. Tonight I'm off to see PUP in Kingston with my friend Emma D, and during the day I'm sifting through a longlist of 51 songs for this week's (40/45 minute) podcast over at editradio due on Tuesday, which is a new podcast record. Fifty-one!

Anyway, Emma and I were also trying to see PUP yesterday (London) and Sunday (Southampton), but both those shows sold out. I'd like to see Pinegrove, a new band I'm really into, on Tuesday in London but sure enough that's sold out too. So instead, I thought I'd start this blog by hailing how excellent 2016 has been for music so far, highlighting the kind of thing that's been filling my ears over the past nine months (though admittedly, some of it was from the tail end of 2015) and generally enjoying the annual rebirth of the music industry as another festival season gets the fuck out of the way, new music starts popping up again and our favourite acts hit the road to play venues which are clearly just too small. Not that I'm any one to talk.

If everything's gone to plan, there'll be a Spotify playlist at the bottom of this page. Listen, enjoy, shuffle it or don't do any of that. But there, I've done my bit to keep recorded music alive for another week. If you like any of it, I encourage you to purchase it.

Of course, what's really been in my ears these past few weeks is the new album. I finished recording my parts in July, all the other stuff got done in the first week of August and we hotfooted over to Old Blacksmiths on the outskirts of Portsmouth to start the mixing process with the emphasis on getting it right instead of just getting it done. A month later and it's all coming together and the artwork is in progress (well, kinda - trusted artist Cat has decided to give birth to a little human which not only takes up her time, but who she also refused to name either Naismith or Lukaku, a blatant sign of disrespect). Once the mixes are done, we'll sort out the track order, cull the worst bits and send it off to be decorated with cream and berries or whatever actually happens during the mastering process.

I'm not unhappy about the prospect of the album not being here yet - as we've already covered, 2016 has had its fair share of excellent records and there are plenty of other shows to go to so I'm not bothered about delaying releasing, touring and generally promoting an album for a little while longer. The general state of my day-to-day life is OK, but deteriorates quickly if I don't look after myself, so the prospect of daily travelling, late nights, hard floors, irregular meals and a forty-plus minute nightly stage workout is something which I will happily postpone if I can. I'll get there, though.

Album (still unnamed) is sounding great although the events surrounding this one mean it's the actual act of recording and releasing it which is significant to me, not how the damn thing sounds. I could overdub it with screaming goat noises and still be happy with it though I should highlight that fans of screaming goat noises will probably be disappointed on first listen.

In the meantime, after one show in 2015 my goal for 2016 was ten shows, and I'm up to nine right now with two more to be announced shortly, so I guess we hit that goal. Give me a huge hello if you see me in any of the following places this Autumn:

The other two shows will be in November and will be announced shortly, though anything outside of the South won't be happening until next year now.

Thanks to everyone who has made the shows so far so special, including an incredible (if technically inept) 2000Trees set, a roasting Reading show back in June and some fun under the railway arches at House of Vans with Frank Turner, Sam Duckworth and Ben Morse (thanks folks).

In the meantime, here's fifty minutes of my favourite songs of 2016 And The End Of 2015, for your Spotify ears. Athankyou:

Rejoice! Rejoice! We have survived the potential frostbite of another winter, and the death by chocolate of another Easter. Spring is here, summer is coming, life is good.

The other day I got an email from Kyle MacFarquharson, who reminded me that:

a) I haven't posted here lately

b) Kyle MacFarquharson has a really cool name

Anyway, here's a blog post about a couple of shows I have coming up.


Oh you want posters? We have posters: 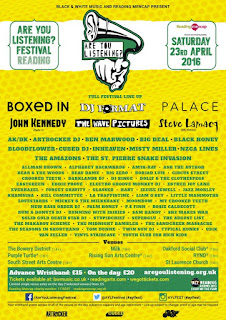 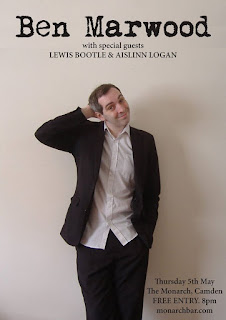 OTAC is 5 today (and yours for free)

"Hey, Xtra Mile?", the phone conversation began, "It's me, Ben Marwood. Outside There's A Curse is five years old at the end of January and I'd like to give it away for free."

Actually come to think of it, this was all over email. I'm rubbish on the phone. Anyway, after some discussion about what kind of 5th birthday party I was going to throw it (a superhero party was agreed), and after I had overcome the sudden, inexplicable urge to eat jelly and ice cream, Xtra Mile gave the go-ahead, and here we are.

Today, 31st January 2016, my debut album from 2011 is entirely, spectacularly free from Bandcamp for the whole 24-hour UK time period.

Outside There's A Curse is, as far as Ben Marwood albums go, pretty popular. It was my first Xtra Mile release, it was reviewed in Kerrang! which in my eyes makes an Actual Album, it has 'Singalong' on it, it has the Postal Service cover on it and even as a man who is often sick of hearing his own songs in recorded format before they're even finished being recorded, I can listen to OTAC all the way through without accidentally clawing my own eyes out.

I'm very proud of it, but apparently not everyone in the world has heard it. If you don't own it already, this is your chance.

Go get it here, and spread the word:

Outside There's A Curse (link expired)
Posted by Ben Marwood at 16:01 1 comment: