the webstore goeth, and then cometh back again..

Holy moly,
So, it turns out that people like t-shirts with slogans from 2008 on, because within five days of the launch of the webstore, shizzle went crazy and the first run of 'Ben Marwood Stole My Sound' t-shirts in blue sold out. This has left me with a choice to make, since I'd told everyone they'd be limited edition.
SOLUTION #1: DO A DIFFERENT COLOUR
Forest green, anyone?
SOLUTION #2: DO A DIFFERENT DESIGN
Singalong lyrics, anyone?
So, yes, this Tuesday the store re-launched with two new t-shirt designs to pre-order, the two above no less. The stock's due early on the second week of May, and whilst I know this is a little while to wait, I decided to sweeten the deal a little bit with some t-shirt related special offers as follow:
PREORDER A NEW SHIRT, GET A NEW MP3
Yep, yep, if you pre-order one of the two new shirts before 6pm on April 26th, you'll be rewarded (or punished) with a brand new, currently-unreleased mp3. I can't decide which one I'm going to give away, so I'm just going to present you with a whole list of them on the 26th for you to choose.
Click here for 'Ben Marwood Stole My Sound' in green
Click here for 'Singalong' in red
PRE-ORDER TWO, GET THREE NEW MP3s
Pre-order two at the same time, and not only will it cost you less, you'll also have a choice of three mp3s from the list, instead of one. Again, this applies before 6pm on April 26th. Go crazy!
As ever, there are also loads of other special offers which you can peruse simply by clicking here
That's that. Thanks for your ongoing support. Because of you, I finally learned how to use the Post & Go machines in the post office.
Ciao!
B
Posted by Ben Marwood at 11:30 No comments:

In very-basic-coding news, I have spent a few evenings over the last couple of weeks trying to remember how to make things look nice in Internet Explorer (hint: it's hard), then I decided instead to make it competent.

When it became clear that my html knowledge does not extend to making things look competent in Internet Explorer, I built the damn thing anyway so you're going to have to either live with its clunky appearance or switch to Google Chrome for a 10% neater outlook. I'm not sure if anyone still uses Firefox and Safari, and I haven't tested it in either so if you do use either and it does work then let me know. You should also let me know if it makes your computer grow teeth and attack a sibling, votes Republican or attempts a military strike on Homs. 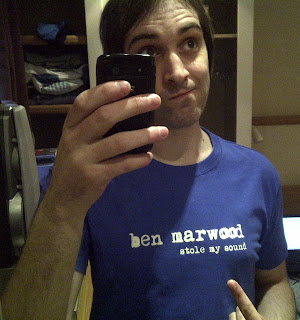 The star turn of the store is this little number, modelled by a goofball who spent a good few minutes trying to look less of a goofball in front of a mirror like a fourteen year old girl on Myspace in 2005.

Xtra-Mile's official CDR copies of Outside There's A Curse

Broken Tail's last official promos of This Is Not What You Had Planned and the last of the real, actual stock of Exclamation At Asterisk Hash

The last of the Ben Marwood beanies and scarves from 2011, reduced to clear.

Plus a whole bundle of combo moves to deploy.

Now taking payment in the forms of all major credit cards, debit cards and interesting pieces of string through Paypal, who in internet terms are veterans of this here game.

With t-shirts, there'll be more designs and stuff to follow over the next few weeks, but I thought I'd start back at the start, in 2008, and finally turn that Get Cape joke back onto myself. I think we can all agree these shirts are long overdue, but I had to wait until I had some downtime to build the store and finalise a design, plus I was waiting for the tenth anniversary of the first solo show I ever had, which happened to be at Aldershot's West End Centre on March 13, 2002.