Well, that was fun, wasn't it? 2013. Thanks for coming. We'll remember you as the year which.. oh, you know what? If you want a proper year in review you should probably watch Charlie Brooker's Newswipe 2013. It's probably on iPlayer already. I'm just here to tell you about nine (correction: TEN) good things you should put in your ears from the past year.

Ten Good Things You Should Put In Your Ears From The Past Year: 2013 Edition
(in no particular order)

Shovels & Rope: O Be Joyful
Second album from Michael Trent and Cary Ann Hearst, albeit their first under the S&R banner. An old-fashioned blues-country trip to the olden days in the Southern states.
See/hear: Lay Low (live at Pickathon)

Chris T-T & the Hoodrats: The Bear
First album in 3,934 years from Chris T-T, this time credited to a full band. Rockier than the normal folk fare but maintains the trademark personal T-T feel. No songs about Nick Clegg though.
See/hear: Gulls


Oxygen Thief: Accidents Do Not Happen, They Are Caused
This is a mini-album but it counts because I say it does. First full-band release from normally-acoustic Bristolian noisemonger. Set faces to melted.
See/hear: Terry Nutkins Salute

Frank Turner: Tape Deck Heart
Fiftieth album in two years from Winchester's own folk-punk hero and history/Iron Maiden buff. Probably the most personal album he'll ever commit to record and the most ambitious one to boot.
See/hear: Recovery

Jetplane Landing: Don't Try
Return of Derry's favourite rockers. Political leanings all but banished, replaced with rock, rock and some more rock. And bits for people to yell along to. This shit's important.
See/hear: Beat Generation... Ha!

Jamie Lenman: Muscle Memory
Another return, courtesy of ex-Reuben frontman, and a double album to boot. A mix of beautiful, exquisitely crafted numbers and metal designed to tear out your brain. Set faces to double-melted.
See/hear: Pretty Please

Off With Their Heads: Home
Disaffected two-minute punk rock at its growling finest.
See/hear: Nightlife

Future of the Left: How To Stop Your Brain In An Accident
Darkly humourous, punchy, punky noise-rock. This is album four, and the spikes are as sharp as ever.
See/hear: Johnny Borrell Afterlife

a note from the author: I haven't heard the new Beans On Toast album yet, so calm down.
Posted by Ben Marwood at 12:54 1 comment:

Is it still Christmas? I'm not really sure. It's that uneasy time between Christmas Day and New Year where some of us (or, to be more specific, I) have gone back to work, whereas some people are still sat around in their pants watching Only Fools and Horses.

Whilst we wait for the arrival of Father Time or Mr New Year or for Justin Bieber to ceremonially spit on a tramp or retire from life or for us all to watch a recording from a few weeks ago of when Jools Holland pretended it was New Year (oft soundtracked by cheerless morons, but I don't know who's on it this OH holy wow it's The Proclaimers, HAIM and Lisa Stansfield).. hang on, I forget where I was. NEW PARAGRAPH.

TOUR! I'm doing a tour! Second album Back Down was released in May 2013, so I'm doing some shows in the first half of this year aimed at putting the album to bed, and maybe showcasing some new songs too, if I'm feeling confident. The first batch of dates have been released, the final batch to follow in a month or so. I'm really, really sorry that despite spending most of my life working til I cry to keep people happy, I'm probably not visiting the pub down the road from you, but hey, if you'd like to come to a Ben Marwood show in the few weeks spanning February 14th to March 8th, here are your choices:


I'm also playing a warm-up show at the Oakford Social Club on 29th January to kick the whole thing off. Why not come along? Or, if you don't enjoy live music, arrange to meet all your loudest friends at the bar?

If that's not the news you wanted, hold on tight for more dates announced early in 2014 and if that's still not good enough, maybe gaze into this poster and see if you can change the locations with your mind: 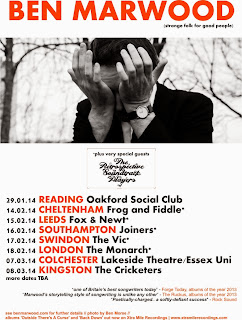 ho ho ho and a bottle of gin for helen chambers, please

So, there you go. Another year draws to a close. Massive highs, crushing lows: standard fare for the 21st Century.

Personally, after the final shows of the year in York, I've been booking some shows, spending time at a desk and, in the past few days, back at the family home for that one time of the year it's acceptable to sit around and definitely not fight at all, no sir. I've just about recovered from the Christmas Party held at the Duchess in York after the final Black Swan show. Helen Chambers somehow managed to escape a hangover the next day despite being what I estimate to be 50% gin, so I bravely had enough of a hangover for both of us. Personally, I'm putting my downfall down to the Duchess serving their spirits in half-sized cups so, being a man of little desire to change my drinking pace, I managed to imbibe twice as much. All's fair in love and nightclubs. I'll see you next year for the rematch, Chambers.

I'm pretty damn happy with how a lot of things this year went. The difficult second album finally saw the light of day (indeed, I don't normally use the phrase Difficult Second Album, but some of the terms I have used for Back Down are just not fit for a public forum) and wasn't chased out of town like a scary mutant, we went touring in the US with Frank, tore 2000Trees a new chimney over the summer and finally admitted that you probably shouldn't be taking life advice from me via the medium of t-shirt.

Thanks one and all for your support. I really couldn't (and, more to the point, wouldn't) do this without you. There really are too many people to thank, so if you're reading this: this is your thanks.