Here is the horizontal news

This blog post is brought to you by the angle 90 degrees, because that is my general resting position at the minute. Eight weeks in and my labyrinthitis didn't have the courtesy to bugger off, plus I've been signed off work for the past week with one more week to go and all this together is making me slightly nervous that I've chosen to promote my rescheduled shows in the following manner: 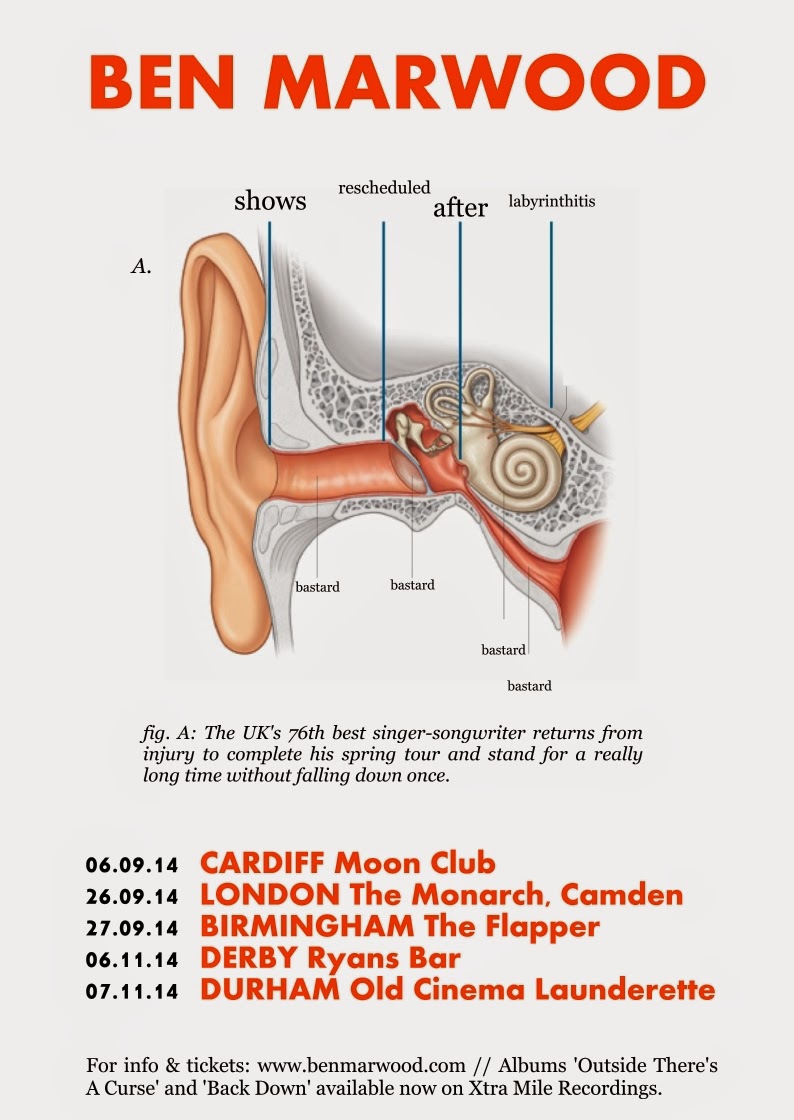 But enough about me and the adventures of my inner ear, I'm here to tell you about two particular things that are either out now or about to be out soon.


Relive the Marwood/RSP tour in style with the RSP live EP!
This past February, my good buddies the Retrospective Soundtrack Players and I joined forces for a brief tour of the UK. One of the nights in question, at the fabulous Joiners Arms in Southampton, was committed to tape - or whatever you call it when the thing you're recording to is digital - including 'Singalong' performed full band in all its glory.

You can get the live EP from RSP's Bandcamp here


Also, Xtra Mile have a new compilation out on August 11th!
The fifth mile high compilation, Smokin', is due out on August 11th on all digital formats and features too many brilliant acts to list them here, but includes the likes of Jamie Lenman, Oxygen Thief, Franz Nicolay, Chris T-T, Mongol Horde and more. The theme is signed vs. unsigned, though I don't think anyone's actually going to fight. Instead, those on the active XMR roster were invited to bring an unsigned buddy along for the ride, and my choice is Quiet Quiet Band. Their debut album is done and out later in the year, but for now I invite you to pick up the compilation and check out their song 'Hunter's Moon'.

Here's what I said about them when they had a gun to my head:


"If I had to describe Quiet Quiet Band in one word, that word would probably be 'run'. Six people comprising one living, breathing beast, their claws twisted tightly around various murder ballads, Quiet Quiet Band's name is about as misleading as their intentions for your heart. Hunter's Moon is a stand-out example of what they can do – a tale of violence cutting from a driven, lyrically-defiant folk rock assault to twinkling percussion, handclaps and viola – the pretty conclusion to a dark opening typical of a band who, lyrically at least, can often be rewarding you with one hand whilst making a stabby-stabby motion with the other. These are some of my best friends. I have no idea how things turned out this way. Send help."

To find out all you need to know about the Xtra Mile compilation, there is a wealth of explanation right over here. Enjoy!

That's it for me, for now. I'm off to perfect my balance in the face of silly male despair.
Posted by Ben Marwood at 11:32 No comments: