Webstore 2: Return of the webstore

Two posts in one day? This is surely nuts, but I think it's merited.

For the first time this year(!), the webstore is open, and will remain open for a month or so. This is a good excuse to get rid of all the new albums on my dining room table, take pre-orders on a great new shirt (which, after all the time I spent faffing around with new designs, is the very first one we came up with due to Shit's Law) and a whole bunch of other things.

New t-shirt (below): Ben Marwood Life Advice
Pre-order any size, expected to ship mid-July. Only fifty to be made!


'Back Down' new album!
The latest major release comes to the webstore. Hear the sounds which had critics so baffled, that most places didn't review it.


'Outside There's A Curse'
Album one! 2011's debut holds up as well now as it did then due to Science!


Ben Marwood/Quiet Quiet Band split EP CD-R promos
Back in February, my good buddies Quiet Quiet Band and I put our heads together and spammed out eight tracks to be sold digitally. We still have a whole set of CD-R promos of the EP in card wallets, never to see a traditional physical release. Strictly limited edition. Get them before they're gone forever and ever.


Bundle offer! Get both albums and the split EP for just £20
All three CDs available in the webstore at a combined price of £20, which ships free to anywhere and everywhere!


The new store is powered by the user- (and seller-) friendly Bigcartel, who are one of the few places who'll sell your stuff for free.. as long as you don't have much to sell. Which is fine because I never do as you can tell from the above.

The t-shirts are expected to ship mid-July, just as the store shuts down so I can bugger off the US for a few weeks. Set wallets to BUY. 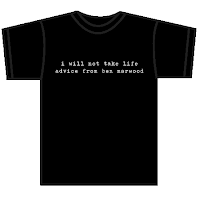 Curiously enough, the biggest news for me on Ben Marwood Day (way back on the 13th May, when the album was released) was not the revelation that I had somehow squeezed out a second album from my brain a mere (ahem) nearly two and a half years after the first, but that I am about to do something I have said for a while I just would never do on the grounds I couldn't afford to.

And now I'm making a liar of myself.

This late July and early August, you can find me Stateside not as a freeloader (sadly), but as a musician, puzzlingly-expensive visa permitting. And massively-expensive flights. Seriously America, why do you make it so hard for people to bring angsty folk joy to your country?

I'll be out on the road to form the most unruly and unpredictable line-up since my collaboration with Shaggy - incidentally, I'm still waiting for that call - as I hit the road as an opener for the mighty Frank Turner and his sleepy souls, and also Off With Their Heads, who I hadn't heard when I agreed to the shows and now I have I can only say "I have to compete with whaaaaaat?".

Friends of the USA! Welcome me with open arms, direct me to your Publix stores where you have them and prepare to make lots of jokes about the Queen as I invade the following places in a few weeks.

Review: Back Down in Rock Sound

Thanks to Oxygen Thief for pointing this at me - nice review of the new album in Rock Sound. 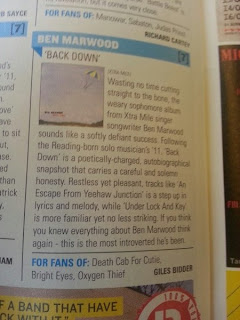