Coming to a sweaty venue near you.. 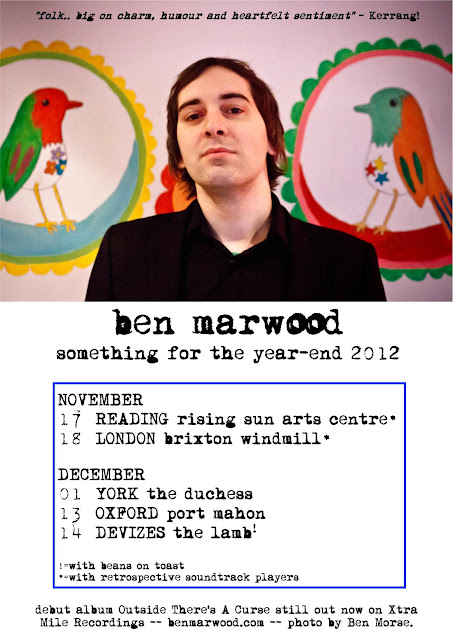 So it turns out, I have some shows coming up. It's been something of a rarity this year, what with gigs in 2012 being put on the back burner to allow me, in theory, to get some kind of life in my life/work balance. I think I hate the phrase "life/work balance" but it does come in useful when you want to describe the balance between life and work.

This is not an exhaustive to-the-end-of-the-year list, because I do expect a couple more to be confirmed, but here are the some which I am definitely, absolutely going to be playing at:

Let the good times roll.
Posted by Ben Marwood at 10:56

Hello October. The lack of September news was not a reflection on there not being any activity on the music front here at BM Inc., but more that there was no news that would set the world on fire. Any little snippets of info went through Facebook and Twitter, etc.

There have been some show announcements that I'll post up here tomorrow (or you can see now on the gigs page), but I wanted to do a brief post about Seattle radio station KEXP. My guitar case proudly displays KEXP stickers from 2010 and 2011 summer fundraising drives, and when summer 2012 rolled around I didn't have the money to spare. When the "fall" (hah) fundraiser rolled around this week, I still didn't have that much, but I've bitten the bullet and done it. I am proud to power KEXP in 2012.

KEXP 90.3 Seattle is a publically-funded alternative rock station with regular live music sessions, which then are made available through a massive streamable archive. They highlight the very best of the Seattle music scene (who gave us more than their fair share of excellent acts over the years, and anyone who knows me well will know I'm definitely not talking about Nirvana), as well as alternative music from the States and often great music from UK acts who you don't always get to hear, perversely, on UK radio stations.

I'm proud to power KEXP, and not just because I enjoy scrolling through their annual reports to see my name amongst the thousands of donors every year.