Yep, it's a brand new year and if the Mayan prophets are to be believed it's the year of the new album, presumably a new setlist and also, finally, the year of the first ever Ben Marwood music video. Relunctantly pro.

But more on that another day. We can't do these things (albums, gigs, media) from a standing start or we'll pull a muscle, so to celebrate it being a new year and me having more songs recorded than I know what to do with, this February will see the release of not one, not two, not three.. wait, actually yes two new EPs available digitally, one my very own work and one shared with my friends Quiet Quiet Band, containing my ex-Broken Tail cohorts Jay Newton and Paul Smith.

Both EPs are released through the fantastic Josaka Music label, a couple of people who I'm proud to be associated with. Back in the days of Broken Tail they let us use their digital and physical distribution deal to get our releases onto iTunes, Amazon and into the shops, and I'm happy to be involved with them again. 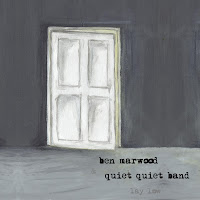 I've been hoping this one will come about for a while. QQB are one of my favourite bands, and a breath of fresh air in much the same way Heartwear Process were in 2007/2008, especially in Reading. Three ex-Heartwear members make up half of Quiet Quiet Band, and now they're slowly conquering the South one gig at a time.

Of my songs, 'A Bedpost Mostly Notches' and 'Come All Ye Unfaithful' were considered for the album right up until the last minute, and a version of 'I Promise You That It Will Be Okay' will indeed crop up on the new album. 'Run Home' is played on piano and I got Quiet Quiet's Jay Newton to help me out with that given that I'm as good at playing the piano as I am at playing Von Rothbart in Swan Lake.

The artwork for this record is by Cathy Holt, and is one of the alternative covers from first album Outside There's A Curse. 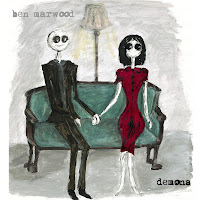 To complement Lay Low, here's an EP I made all by myself. Largely comprised of songs that didn't fit on the album, it features two versions of a song involving my favourite airport, two songs that were written during recording sessions for album #1 ('All Teeth On Skin', 'You Can Run Away For Money'), a cover of one of my favourite Cake songs ('Daria') and a song called 'Demons' which will feature on the forthcoming album and contains a ripping guitar solo from Paul Cardno of Damien A Passmore & the Loveable Fraudsters, Reading's tallest comedy country band.

The artwork for this record is also by Cathy Holt, and is another one of the alternative covers from first album Outside There's A Curse.

So, there you have it. More to come tomorrow - I haven't got any new noises to offer you today, so instead here's a video from Beans on Toast.